Get Into Holiday Spirit With These Blog Ideas!

Get Into Holiday Spirit
With These Blog Ideas! 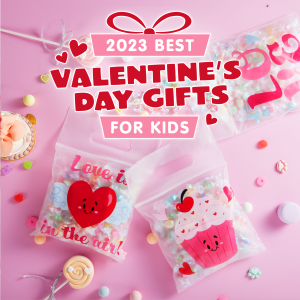 What to get kids for Valentine’s day? [Ultimate Guide]

Written By Ryan Barrett Before we think of Valentine gifts for kids, let’s go back to the beginning. What comes to mind when you think of Valentine’s day? Roman soldiers? Probably not. Unless you want a big hunk of leather-clad ancient Italian as a Valentine! However, these Roman soldiers are responsible for our current incarnation of Valentine’s day. Way back when around 268 CE marriage was illegal for soldiers. Guess having a family made them weak on the battlefield. Our heart-loving hero, a priest named Valentine, thought this incredibly unjust, and performed marriages in secret for the soldiers. Fast forward to now- how the heck did we get from a superspy hero priest to candy hearts? Well like any holiday in the US it’s a mixture of pagan and Christian traditions. The English poet Gregory Chaucer wrote while in prison about ‘sending’ a Valentine. Fast forward to the 19th century, the British candy company Cadbury invented heart-shaped chocolates to sell more chocolates on Valentine’s day. These days imagine how your kids feel if you feel bored with the same old valentine gifts for kids. There’s a slight calm perhaps as they look down in defeat at those colorless chocolates. Then Valentine’s Day is just around the corner and we’ve got all the Valentines day decor and Valentines day gifts to make your loved feel special. 💖💖💖Valentines day decor Valentines day decor is one of the most awaited days of the year. If you are looking for some great Valentines day decor ideas, then let me help you! You can use any of these ideas to decorate your home and make it look beautiful! The best part about these ideas is that they are affordable for all families! Valentines home decor Whether it’s a giant balloon or a cutout, these inflatables are perfect for decorating any space! Our Valentine inflatable options include popular sayings like “Be Mine,” “Love You,” “Wish You Were Here” and more. The giant hearts are also available in red or pink colors. Top valentines inflatables you can not miss Valentine party decorations Valentine party decorations are a fun way to celebrate the day of love. They can help add some romance or even just add a little bit of color and whimsy to your event. 💖💖💖Valentines day gifts There’s no better way to celebrate Valentine’s Day than with an incredible gift. We’ve gathered some of our favorite